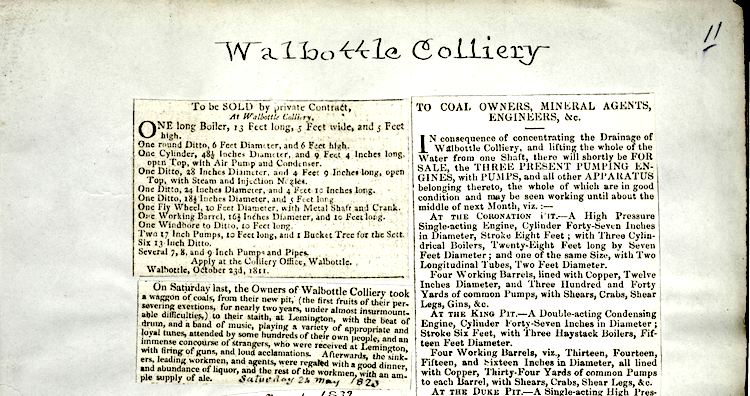 13 volumes containing extracts from printed sources and newspapers cuttings re geological matters and the history of coal mining.

7 volumes containing newspaper cuttings, notes, handbills, extracts, pamphlets and plans re collieries in Northumberland and Durham arranged roughly in alphabetical order.
Most of the material consists of newspaper cuttings re the sale or lease of collieries, advertising of vacancies, accidents, explosions and pitmen’s disturbances and descriptions of the collieries. These are included for almost every colliery and are not individually specified, only the name of the colliery and covering dates are given. If additional material is included e.g. notes, usually taken from Sykes, Local Records, plans, sections of strata, hand bills, pamphlets, bills of lading or accounts, this is noted. All documents are printed except where otherwise specified.

A volume containing newspaper cuttings, extracts, pamphlets and plans re coal mining in Cumberland, Lancashire, Yorkshire, Wales, Scotland and abroad, the mining of copper, lead and other metals and alkali production, 1776 – 1850

A volume containing handbills, pamphlets, minutes, plans and cuttings re keelmen, the coal trade, prices and duties, the Mining Association of Great Britain and prospectuses of various companies, 1789 – 1863

A volume containing pamphlets, handbills, cuttings and reports re coal mining, including reference to mining in New Zealand. The material is similar in character to those above, but appears to be the beginning of a new series. Each document is numbered and the volume is divided into 2 sections entitled volumes 1 and 2, 1801 – 1882