Delegation from the Tianjin Bureau of land Resources and Housing Administration

The Mining Institute hosted a visit by a Delegation from the Tianjin Bureau of land Resources and Housing Administration on 20th April.  The purpose of the visit was partly to forge relationships between the Institute and this important mining region of China, and partly to promote the forthcoming ‘China Mining Congress 2016’ that will be held in Tianjin from 22 to 25th September.  Past-President Norman Jackson made a presentation on the issues faced by the North East of England, immediately following coalfield closure; and short addresses were also made by Institute Development Director Peter Stark OBE and Manager Simon Brooks. 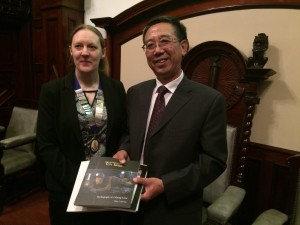 Details of the Mining Congress can be found on www.chinaminingtj.org