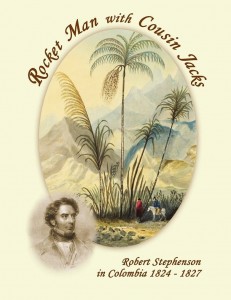 This new book by Bob Longridge about the great civil and mechanical engineer Robert Stephenson, George’s only son, reveals for the first time the full account of his 3 years in the northern part of South America – mainly in Colombia – as a mining engineer between 1824 and 1827. He was only 20 when he set out for La Guayra (Venezuela) from Liverpool in a brig the Sir William Congreve.
It is based on 111 letters from him to his boss in Bogotá, Richard Illingworth. They have been in the collection of the Lilly Library, part of Indiana University in America, for years but no previous biographer had consulted them.

The book includes substantial extracts from the letters, a selection of the writings of Stephenson’s companion Charles Empson who describes the life they lived at a time when the land was covered in ancient trees and still had a huge variety of wildlife such as monkeys and parrots, and a chapter on the life of Cornish families at that period. It is illustrated with reproductions of a series of Empson’s beautiful contemporary watercolours plus photographs taken by the author on a recent visit to search for remains of the principal mine where Stephenson was based, near the town of Mariquita.