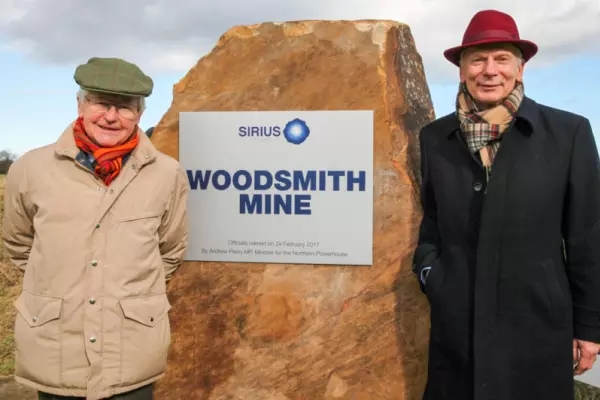 We are very proud to see that our Past-President, Frederick Smith, has been honoured in the naming of a new mine by Sirius Minerals near Whitby.  Alongside fellow geologist Peter Woods, Rick played a key role in the development of the mine.  Peter Woods played a leading role in the exploration of the potash deposit that led to the development of Boulby mine in the late 1960s, where he became Chief Geologist for fifteen years. Peter’s geological knowledge, coupled with his understanding of the sensitivity of the local environment, has been an important part of the development of the Sirius project. Rick Smith and his team at FWS Consultants led the initial geological appraisal, conceptual modelling, seismic interpretation and surveying, and resource exploration drilling for the project, and remain involved today.

The site naming marks another important step in the project’s progress. The company recently began highways enabling works following it successfully raising financing for the start of construction in November last year.  The Woodsmith mine is predicted to bring 1000 jobs to the area.